The Southland of New Zealand is famous for its trophy trout, crystal clear waters and river access. Over 35 excellent trout fishing rivers, streams and lakes are within 1 hours drive of Lumsden. They include the Aparima, Clutha, Eglington, Eyre, Hamilton Burn, Lake Te Anau, Lake Wakatipu, Lake Manapouri, Mararoa, Mataura, Mokoreta, Monowai, Nevis, Oreti, Otapiri, Pomahaka, Tomogalak, Upukerora, Von, Waiau, Waikaia, Waimea, Waipahia, Waituna Lagoon and Whitestone. Lumsden is a central point for fishing opportunities in every direction of the compass. This diversity has resulted in Southland having the greatest participation in angling per capita than any other region in New Zealand. 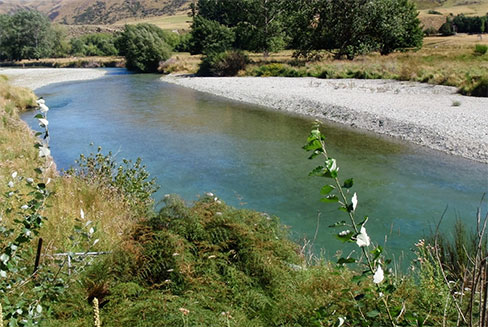 The Mataura River has an international reputation as one of the best trout fishing rivers in the world. According to NZ Fish and Game studies, it has the highest population of fish per kilometre and catch rate of any other river in New Zealand. It is reputed to be the ultimate in dry fly fishing as it offers nearly 150km of easily accessible waters. The Mataura is also famous for its hatches and spinner falls - particularly in late summer from the Mayfly. With easy public access, plentiful fish and water so transparent it is often described as 'gin-clear', the Mataura Valley is a 'dry-fly Mecca'. Many access points for the upper and mid Mataura River are within a 30-60 minutes drive from Oreti River House. 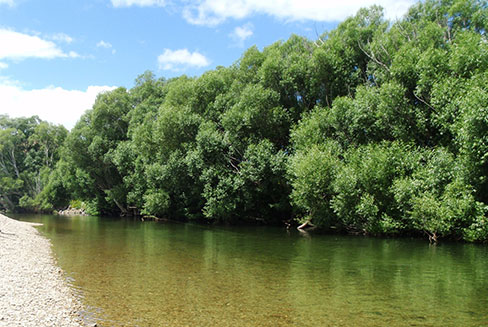 The Waikaia River is the largest tributary of the Mataura River and carries a discharge approximately equal to the Mataura. So really at the confulence we have two equally large rivers joining each other with equivalent water flow and quality. Both are a highly regarded brown trout fishery.The water quality and fish population in the Waikaia is thought to be equivalent to the Mataura’s even though it does not have the fame and reputation of its relative. It is a very exciting river to visit when willow grubs drop and mayfly’s hatch in summer and early autumn. Like its famous cousin it has larger fish in its headwaters. We believe it is an under-rated fishery and a fabulous location to spend a day fly fishing. Many access points for the Waikaia River are within 30 minutes drive from Lumsden.

The mighty Mataura is only one of four large rivers in the province which also includes the Aparima, Waiau and the Oreti. 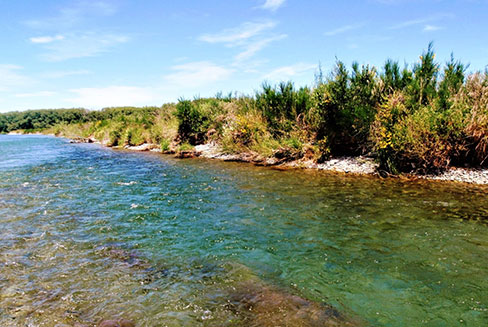 The Oreti River, which flows through the back of Lumsden, rises in the Southern Alps and flows south for 130 km to enter the sea at Invercargill. Upstream from Mossburn its headwaters are protected by a World Conversation Order (2008) recognising its outstanding values including its spectacular fishery and the pristine state of the river. It has a national and international reputation for being the home to trophy brown trout which languish in its upper reaches. Browns average around 5 - 6 pounds and double digit fish are common but challenging to catch. Both the size and numbers of brown trout in the upper Oreti make it exceptional on a national basis. In particular, the average size of brown trout, at just over 6 lbs, is over 10% greater than in ten other highly valued South Island headwater fisheries. The upper Oreti has the highest average trout size of any Southland river.  In Southland Fish & Game’s 2020 drift dive survey of the upper Oreti, on average, 28 large trout were seen per kilometre. (Large trout are considered to be over 400mm or 16 inches in length). This recorded number is estimated to be approximately 60% of the actual population. This fishery is truly unique because the large and numerous brown trout are located within striking scenery in a remote location. The upper Oreti River really offers a pristine back country wilderness fishing experience with the promise of catching the ultimate trophy fish. The middle stretches of the Oreti which flow through the back of Lumsden also holds large fish which can offer a wonderful day outing just 10 minutes walk from our accommodation.

The Oreti River has also been identified as an important area for breeding colonies of endangered Black-billed Gulls. Southland rivers are the last refuge for these small gulls that are often seen flying over Oreti River House.

Although Southland is known for its superb brown trout hatchery, a number of rivers in the region also hold good populations of rainbow trout. This is particuarily true in the spring when water levels are high and the "bows" have remained upstream after spawning. These rivers are the ones that run out into the large lakes that are scattered throughout the landscape. Some of these rivers can also hold mixed populations of rainbow and brown trout throughout the year, as some rainbows chose to become river residents rather than returning downstream to the lake after spawning.

Southland attracts anglers from around the globe who return annually to outwit, outplay and outlast the big brown. It is not surprising to find that fishing novices and experts from all over the world regularly base their fly fishing trips from Lumsden. Many return on an regular basis to improve their skills and enjoy the angling adventures that the region promises.

There is always something more to learn or enjoy beside the river- a new fly pattern or fly presentation, changes in local trout behavior due to water levels or insect hatches or improvements to casting and landing techniques. Ask some of New Zealand's most renowned trout guides to enhance your fishing experience and discover the South Island's amazing and extensive fishery. Information about guiding can be found at

Detailed information is provided in Oreti River House about local rivers, streams, springs and burns. We have maps, books, DVD's and our own written folders to assist all our guests with their fishing adventures.